Over many months and seasons, Appau Jnr Boakye-Yiadom and I shared conversations about rhythms that resurface in the world around us: cultural, circadian and the intersections between, from music to fruit to geology and back again.

Junior works collaboratively with percussionists from different musical backgrounds: rhythms and tempos of differing cultures rub up against, intersect and redirect one another. Soundscapes of disparate histories, ecosystems and landscapes that have borne percussive identities that communicate and bind peoples together, reach out and intermingle. His artworks collect, reconfigure and reuse these time and again; one work leaning into the next, or resurfacing in another at a later point. Meanwhile, Anna Lowenhaupt Tsing writes of polyphonic assemblages and the salvaged rhythms of capitalist production, sometimes palpable at the surface but often hidden deeper, out of earshot, but conducting earthly relationships nevertheless.

Together, here and in future constellations, we listen for the beat of entangled lives, cultures and ecosystems. 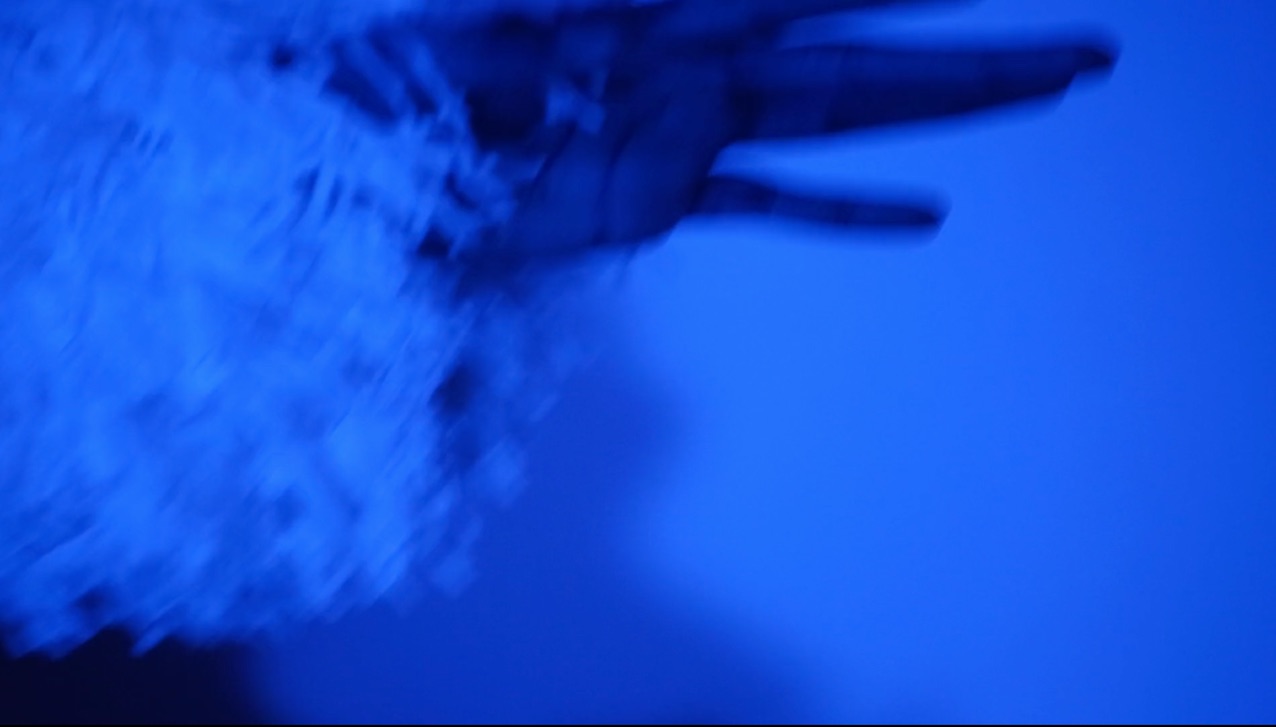 Junior filmed a martial artist performing acrobatic moves across the breadth of a dance studio, recording his movements with a single fixed video camera and eight different microphones around the space, sonically picking up his movement as he leaves the video frame. Wearing a full head and body costume made out of tissue paper, the performers’ movements echoed white noise.

Later, in an exhibition set-up, Junior projected the video, filling the space with the surround-sound audio recording. Bringing Gumboot Dance, Bodhrán Drum, Tswana Dance, Taiko Drums, Bebop Time, Slow Grind, Tibetan Chanting, House Music and many others into a fabric of a rhythmic landscape, he invited various drum percussionists to respond within the visual and sonic environment. They too were recorded and later intertwined into the previous footage. The work continues to be an ever-evolving work, continuously performed to and reedited; an on-going, accumulating dialogue between cultural rhythms. 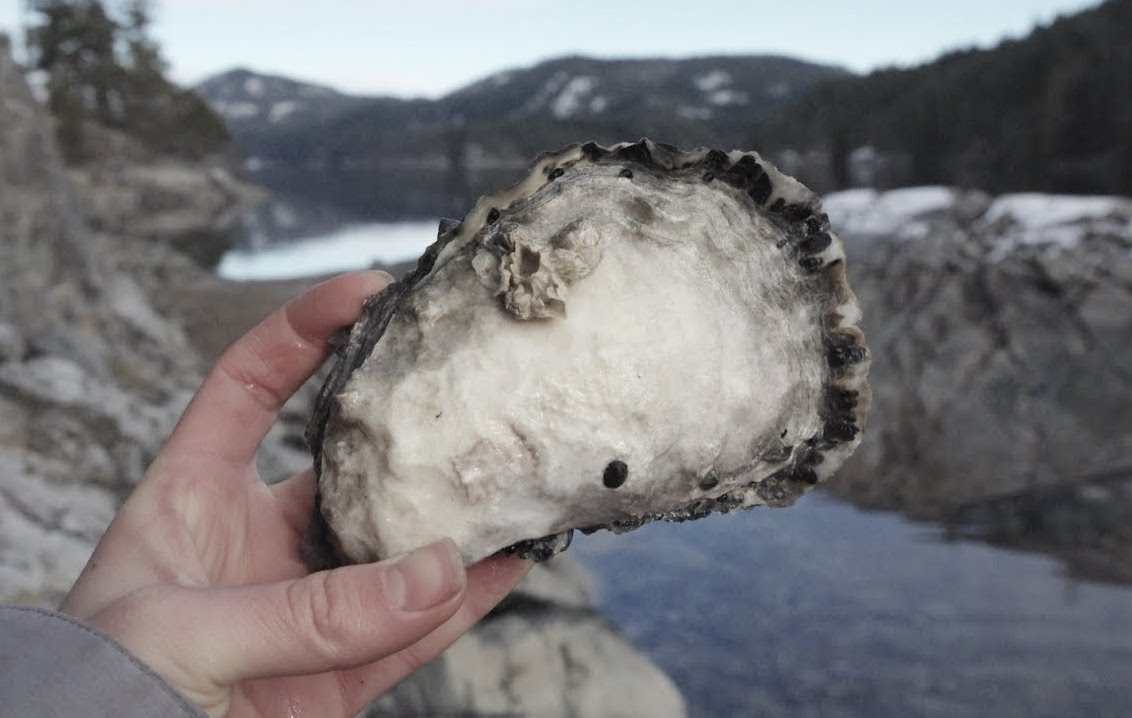 The periodic inundation and exposure that results from tidal flow controls changes in temperature, pressure, agitation, salinity, and feeding conditions. Take oysters. When the sea is high, they open their shells for a longer period of time than when it is low: not much longer—it is too dangerous; only three or four min-utes more per hour. Just enough longer to take safe advantage of the fresh source of nourishment brought in by the turning of the tide.

In the early 1950s, biologists pulled about a dozen oysters from New Haven harbor and shipped them to Northwestern University in Illinois for study. The oysters were submerged in their original harbor water and kept in total darkness. To explore their feeding patterns, the researchers tied to the shells fine threads that could activate recording pens every time the oysters’ muscular movements caused the hinged shells to part or come together. Just as expected, the oysters continued to open and shut their shells as if they still were snug on the bottom of their home harbor, even though they had been displaced to another time zone more than a thousand miles to the west. Then, after about two weeks, something strange happened. Gradually the hour of maximal opening of the shells began to drift from day to day. […] We would expect all oysters to open and shut on a 24.8-hour schedule. But, the biologists in Illinois were witnessing a daily drift that corresponded to a different beat.

After four weeks of recording and analyzing the data, they had determined beyond any doubt that the oysters had restabilized the rhythmic opening and closing of their shells to the tidal cycle that would occur in Evanston, Illinois, had there been an ocean in that location. For the rest of the time the oysters were observed, they continued to maintain this new cycle. It was as if they had gradually adjusted their life’s pace to correspond to the time when the moon was overhead as seen from Northwestern University rather than from New Haven harbor. Could this lowly form of life actually feel the moon’s presence through the sealed walls of the laboratory?’

Anna Lowenhaupt Tsing | The Mushroom at the End of the World

‘Ecologists turned to assemblages to get around the sometimes fixed and bounded connotations of ecological “community.” The question of how the varied species in a species assemblage influence each other—if at all—is never settled: some thwart (or eat) each other; others work together to make life possible; still others just happen to find themselves in the same place. Assemblages are open-ended gatherings. They allow us to ask about communal effects without assuming them. They show us potential histories in the making […] Patterns of unintentional coordination develop in assemblages. To notice such patterns means watching the interplay of temporal rhythms and scales in the divergent lifeways that gather.’

Anna Lowenhaupt Tsing, The Mushroom at the End of the World: On the Possibility of Life in Capitalist Ruins

‘Ecologists turned to assemblages to get around the sometimes fixed and bounded connotations of ecological “community.” The question of how the varied species in a species assemblage influence each other—if at all—is never settled: some thwart (or eat) each other; others work together to make life possible; still others just happen to find themselves in the same place. Assemblages are open-ended gatherings. They allow us to ask about communal effects without assuming them. They show us potential histories in the making. For my purposes, however, I need something other than organisms as the elements that gather. I need to see lifeways—and nonliving ways of being as well—coming together. Nonhuman ways of being, like human ones, shift historically. For living things, species identities are a place to begin, but they are not enough: ways of being are emergent effects of encounters. Thinking about humans makes this clear. Foraging for mushrooms is a way of life—but not a common characteristic of all humans. The issue is the same for other species. Pines find mushrooms to help them use human-made open spaces. Assemblages don’t just gather lifeways; they make them. Thinking through assemblage urges us to ask: How do gatherings sometimes become “happenings,” that is, greater than the sum of their parts? If history without progress is indeterminate and multidirectional, might assemblages show us its possibilities?

Patterns of unintentional coordination develop in assemblages. To notice such patterns means watching the interplay of temporal rhythms and scales in the divergent lifeways that gather. Surprisingly, this turns out to be a method that might revitalize political economy as well as environmental studies. Assemblages drag political economy inside them, and not just for humans. Plantation crops have lives different from those of their free-living siblings; cart horses and hunter steeds share species but not lifeways. Assemblages cannot hide from capital and the state; they are sites for watching how political economy works. If capitalism has no teleology, we need to see what comes together—not just by prefabrication, but also by juxtaposition […] Since the time of the plantation, commercial agriculture has aimed to segregate a single crop and work toward its simultaneous ripening for a coordinated harvest. But other kinds of farming have multiple rhythms. In the shifting cultivation I studied in Indonesian Borneo, many crops grew together in the same field, and they had quite different schedules. Rice, bananas, taro, sweet potatoes, sugarcane, palms, and fruit trees mingled; farmers needed to attend to the varied schedules of maturation of each of these crops. These rhythms were their relation to human harvests; if we add other relations, for example, to pollinators or other plants, rhythms multiply. The polyphonic assemblage is the gathering of these rhythms, as they result from world-making projects, human and not human.

Before they arrive in the hands of consumers, most commodities journey in and out of capitalist formations. Think about your cell phone. Deep in its circuitry, you find coltan dug by African miners, some of them children, who scramble into dark holes without thought of wages or benefits. No companies send them; they are doing this dangerous work because of civil war, displacement, and loss of other livelihoods, owing to environmental degradation. Their work is hardly what experts imagine as capitalist labor; yet their products enter your phone, a capitalist commodity. Salvage accumulation, with its apparatus of translation, converts the ores they dig into assets legible to capitalist business. And what of my computer? After its short useful life (as I surely must replace it with a newer model), perhaps I will donate it to a charitable organization. What happens to such computers? It seems they are burned for potential components, and children indeed, following salvage rhythms, get to pick them apart for copper and other metals. Commodities often finish their lives in salvage operations for the making of other commodities, to be recouped again for capitalism through salvage accumulation. If we want our theories of the “economic system” to have anything to do with livelihood practices, we had better take note of such salvage rhythms.

The challenges are enormous. Salvage accumulation reveals a world of difference, where oppositional politics does not fall easily into utopian plans for solidarity. Every livelihood patch has its own history and dynamics, and there is no automatic urge to argue together, across the viewpoints emerging from varied patches, about the outrages of accumulation and power. Since no patch is “representative,” no group’s struggles, taken alone, will overturn capitalism. Yet this is not the end of politics. Assemblages, in their diversity, show us what later I call the “latent commons,” that is, entanglements that might be mobilized in common cause. Because collaboration is always with us, we can maneuver within its possibilities. We will need a politics with the strength of diverse and shifting coalitions—and not just for humans.’

Anna Lowenhaupt Tsing, The Mushroom at the End of the World: On the Possibility of Life in Capitalist Ruins