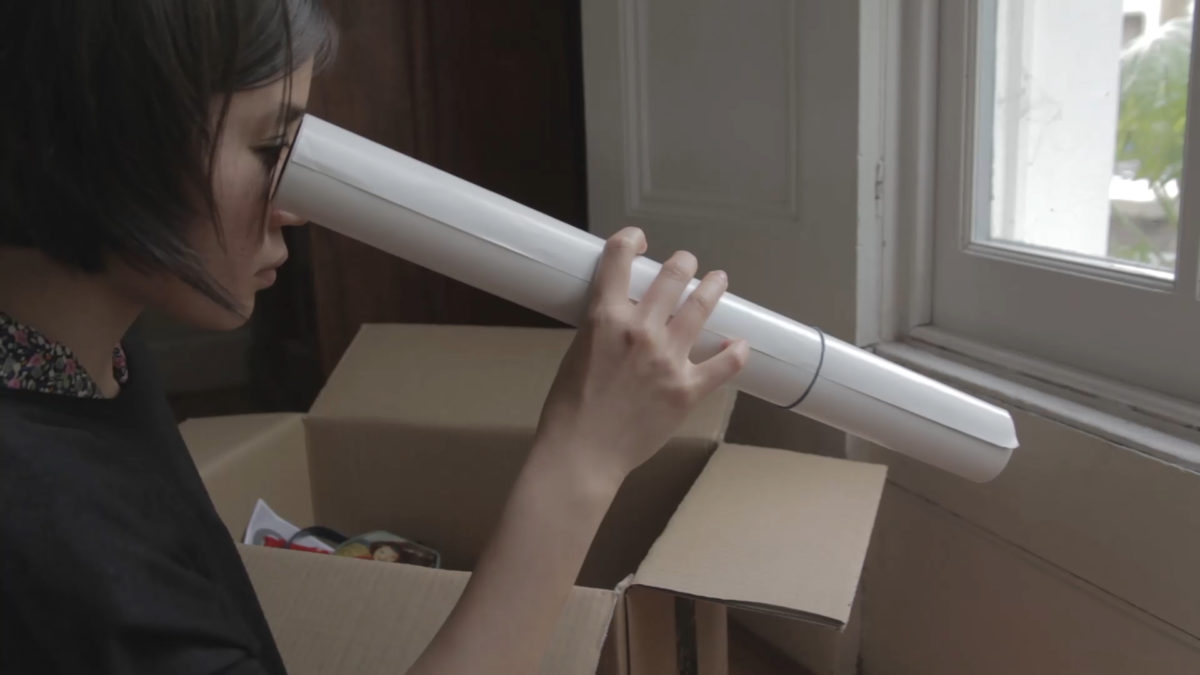 In Bo Choy’s wonderful film, un/folding in (2016), traditions, memory and heritage resurface within the present realm, giving texture and form to the contemporary psyche and social fabric.

In a lineage of modern science, we have known since at least Einstein’s theory of special relativity, that ‘now’ doesn’t exist; only ‘here and now’ can be true. Bo’s film teeters amongst varying temporal realities. ‘Everything is present, but in different dimensions that maybe we can’t access. When people say that they see a ghost, maybe it’s just someone crossing through a different dimension. Maybe it’s just our antennae or our senses that are slightly misbehaving in that moment to tap into this other dimension.’

Her works embrace the productive messiness between nodes – of self, family, society, nature, ether, spirit, history, heritage and the urban – rather than attempt to untangle them. The past, present and future conjoin, in a ‘moment ripe with revolutionary possibilities, a constellation of memory, consciousness and hope’.

Evald Ilyenkov | Cosmology of the Spirit

Committing no crime against the axioms of dialectical materialism, one can state that matter constantly possesses thought, constantly thinks itself.

This, of course, does not mean that matter in each of its particles at each moment possesses the capacity to think and thinks in its actuality. This is valid in relation to matter as a whole, as a substance, infinite in time and space.

Matter, with a necessity inherent in its nature, constantly engenders thinking creatures, constantly reproduces, now here now there, an organ of thinking—the thinking brain. And by virtue of the infinity of space, this organ thus exists in its actuality, in each finite moment of time some­ where in the fold of infinite space. Or, contrariwise, in each finite point of space (here by virtue of the infinity of time) thought is also realized soon­ er or later (if these words are applicable to infinite time) and each particle of matter by virtue of this, at some point in the fold of infinite time, forms an integral part of a thinking brain, that is, it thinks.

Therefore it is possible to say that, in each actual given moment of time, thought is an intrinsic property of matter—if at one point of infinite space matter destroys an organ of thought, the thinking brain, so with the same iron necessity at the same time in some other point it reproduces this organ.

The organ through which matter thinks of itself, consequentially, does not disappear at any single moment of infinite time, and thus matter constantly possesses thought as one of its attributes. It cannot forfeit it for a single moment. Moreover, one must assume that a brain that thinks in its actuality always exists in the fold of infinity simultaneously at all the stages of its development: at some points in the stage of its genesis; at others during the phase of its decline and at others again during the peak of its development and potency.

Through physics we can predict with great certainty the actions of the particles of the universe, even those–such as dark matter– which we know so little about. Yet the realm of where and how consciousness materialises remains a mystery. Panpsychism is embedded in Eastern philosophies and indigenous understandings, and even from the earliest ancient Greek thought; Diogenes claimed that Thales (c. 624–545 BCE) believed that ‘the universe is alive and full of spirits’. Against the backdrop of Russian Cosmism, Evald Ilyenkov reflected existence as a constant cyclical movement from the lowest forms of matter (biological, chemical, and physical) to the highest (“the thinking brain”) and back again through their decomposition: the universe’s immanent logic of becoming.

“We will have our chance, and with a little bit of luck will 'taste the wine of centuries unborn'”

From Robert C.W. Ettinger’s 1962 book ‘The Prospect of Immortality’. A pioneer of transhumanism, he is known as ‘the father of cryonics’.

The Nature of Reality: A Dialogue Between a Buddhist Scholar and a Theoretical Physicist. The Institute for Cross-Disciplinary Engagement at Dartmouth, 2017