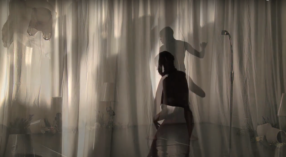 Okpokwasili’s practice takes on a process of desedimentation of the black female body, uncovering and reading its ingrained ancestorial narratives.

In her collective performance, Sitting on a Man’s Head, inspired by one of many forms of protest practiced by Nigerian women in 1929 in defiance of colonial rule, she asks ‘what do we carry that carries us?’ The phrase is a powerful reminder that we are the accumulation of a multitude of pasts but also the guardian of futures.

This extract is from the opening scene of her work Bronx Gothic, a semi-autobiographical performance embodying two young black girls talking about growing up in the Bronx, feeling vulnerable and discovering sexuality. The endurance, resilience and determination her body displays, simultaneously exposes its fragility, a parallel we found drawn in Ursula K Le Guin’s essay, Being Taken for Granite.

From the sedimentary strata of mountains to the narratives underlying our own gestures, bodies – human, non-human and geological – are an accumulation and amalgamation of historic interactions. Lineage, past lives and trauma secrete themselves in these bodies; and as silences resurface to reveal our entangled pasts, they form us in the contemporary and redirect futures.

In the beautiful essay, Being Taken for Granite, Ursula K Le Guin expressed a kinship with mud as a body that yields, reacts, imprints and responds. Talking of her breathtaking performance, Bronx Gothic, Okwui Okpokwasili describes a body ‘shifting and coming apart and becoming known to itself’.

Taking Le Guin’s text as a guide we unravel relationships between the body and the soil from which we are borne, considering ways of archeologically excavating and reading bodies to understand their ever-present dialogue with the past.

I am not sure what I am but I know it isn’t granite. I have known some granite types, we all do: characters of stone, upright, immovable, unchangeable, opinions the general size shape and pliability of the Rocky Mountains, you have to quarry five years to chip out one little stony smile. That’s fine, that’s admirable, but it has nothing to do with me. Upright is fine, but downright is where I am, or downwrong.

I am not granite and should not be taken for it. I am not flint or diamond or any of that great hard stuff. If I am stone, I am some kind of shoddy crumbly stuff like sandstone or serpentine, or maybe schist. Or not even stone but clay, or not even clay but mud. And I wish that those who take me for granite would once in a while treat me like mud.

Being mud is really different from being granite and should be treated differently. Mud lies around being wet and heavy and oozy and generative. Mud is underfoot. People make footprints in mud. As mud I accept feet. I accept weight. I try to be supportive, I like to be obliging. Those who take me for granite say this is not so but they haven’t been looking where they put their feet. That’s why the house is all dirty and tracked up.

Granite does not accept footprints. It refuses them. Granite makes pinnacles, and then people rope themselves together and put pins on their shoes and climb the pinnacles at great trouble, expense, and risk, and maybe they experience a great thrill, but the granite does not. Nothing whatever results and nothing whatever is changed.

But when people walk on me you can see exactly where they put their feet, and when huge heavy things come and stand on me I yield and react and respond and give way and adapt and accept. No explosives are called for. No admiration is called for. I have my own nature and am true to it just as much as granite or even diamond is, but it is not a hard nature, or upstanding, or gemlike. You can’t chip it. It’s deeply impressionable. It’s squashy.

Maybe the people who rope themselves together and the huge heavy things resent such adaptable and uncertain footing because it makes them feel insecure. Maybe they fear they might be sucked in and swallowed. But I am not interested in sucking and am not hungry. I am just mud. I yield. I do try to oblige. And so when the people and the huge heavy things walk away they are not changed, except their feet are muddy, but I am changed. I am still here and still mud, but all full of footprints and deep, deep holes and tracks and traces and changes. I have been changed. You change me. Do not take me for granite.

The Wave in the Mind: Talks and Essays on the Writer, the Reader, and the Imagination (Shambhala, 2004)